Jakkalsvlei, directly translated as Jackal’s Marsh, is a family owned winery nestled in the beautiful, world famous Garden Route. The Jonker family have been proud owners of Jakkalsvlei since 1972, and today it is farmed by 3rd generation Jonkers. The farmland is called Jakkalsvlei due to the abundance of foxes, jackal’s and wild cats seen in the Langeberg mountains and surrounding farmlands. While regularly hunting in the area, Oupa Nelis Jonker was inspired by the beautiful scenery and chose to acquire this special piece of land.

Herbertsdale offers good water, fertile soil and a warm/dry climate, making it a choice environment for farming fruit and vineyards.

In 1987, Oupa Nelis Jonkers son, Andrew Jonker planted the first Chenin Blanc vineyard. Jantjie Jonker, Nelis’s grandson, settled on the farm in 2007 and bottled the first wine under the Jakkalsvlei label in 2008 which was the Mount Cuvée and Hanepoot.

Jakkalsvlei opened its doors to the public in January 2010 and has been growing ever since. This decade was also celebrated with the launch of a premium wine collection.

The exclusive Lord Jackal wine range is produced in limited quantities and is only available at the Jakkalsvlei tasting room. 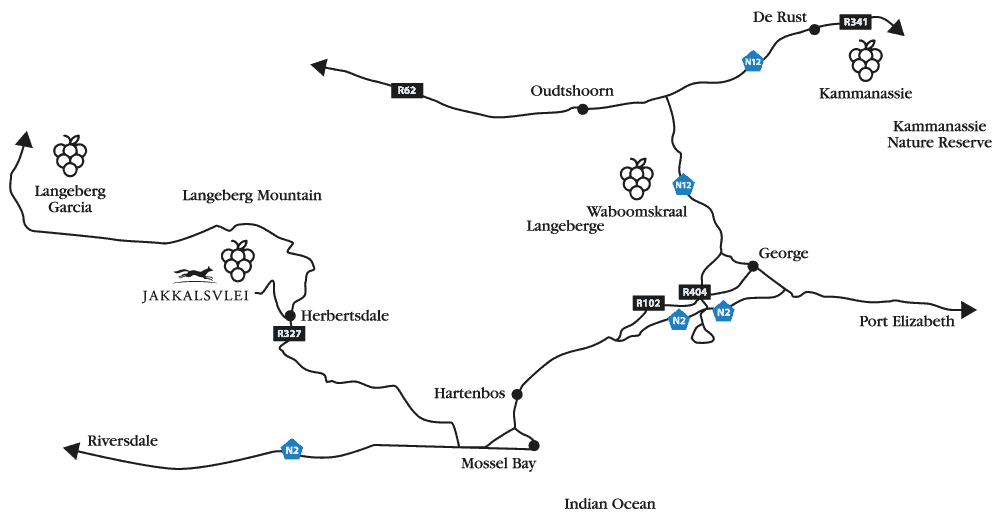 Jakkalsvlei is situated at the foot of the Langeberg Mountain which is 40 km from the Indian Ocean. The farm produces roughly 300 000 liters annually from 50 Ha of operating vineyards. 18 Ha of vines from the farm are used in the production of our Sauvignon Blanc, Muscat and Pinotage being the most notable.

The cooler South Coast climate and sandstone soils make the area ideal for quality Sauvignon Blanc. North West from Jakkalsvlei, on the Northern side of the Langeberg Mountain, lies another 20 Ha with mostly Sauvignon Blanc planted in mineral-rich sandy loam soil and red varieties such as Cabernet Sauvignon, Shiraz and Merlot in decomposed Koue Bokkeveld Shale. Chenin Blanc and Rhone White varieties are sourced from the hotter and dryer climate of the Klein Karoo with additional Sauvignon Blanc being brought in from the cool Waboomskraal region near George.

Our vision at Jakkalsvlei is to produce fine wines from the Garden Route that reflect the complexity, richness and diversity of our unique terroir.

Jakkalsvlei continues to be one of the Garden Route’s most popular destinations. For first-time visitors, it’s usually love at first sight after experiencing the breathtaking vineyard and mountain views that the farm has to offer. We hope that you and your family feel the same.

This website uses cookies to improve your experience while you navigate through the website. Out of these, the cookies that are categorized as necessary are stored on your browser as they are essential for the working of basic functionalities of the website. We also use third-party cookies that help us analyze and understand how you use this website. These cookies will be stored in your browser only with your consent. You also have the option to opt-out of these cookies. But opting out of some of these cookies may affect your browsing experience.
Necessary Always Enabled
Necessary cookies are absolutely essential for the website to function properly. These cookies ensure basic functionalities and security features of the website, anonymously.
Functional
Functional cookies help to perform certain functionalities like sharing the content of the website on social media platforms, collect feedbacks, and other third-party features.
Performance
Performance cookies are used to understand and analyze the key performance indexes of the website which helps in delivering a better user experience for the visitors.
Analytics
Analytical cookies are used to understand how visitors interact with the website. These cookies help provide information on metrics the number of visitors, bounce rate, traffic source, etc.
Advertisement
Advertisement cookies are used to provide visitors with relevant ads and marketing campaigns. These cookies track visitors across websites and collect information to provide customized ads.
Others
Other uncategorized cookies are those that are being analyzed and have not been classified into a category as yet.
SAVE & ACCEPT